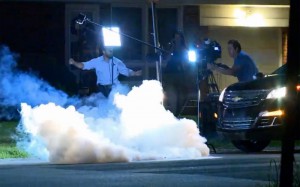 The now infamous tape of Al Jazeera America cameras being dismantled by police in Ferguson, MO is igniting a debate about press surveillance in the digital world that has been boiling over for several years since NSA revelations and tracking of certain journalists last year in the DOJ have come clear.

Press distrust with the government was likely already at an all-time modern high before this week’s run ins, and militarized policeman harassing and even arresting journalists — in a McDonald’s no less — certainly isn’t helping the federal governments PR war that what they are doing is for the good of the nation and no their own images.

Thie videoÂ is one of many reports of police aggression towards news media on Wednesday, including the arrests of Washington Post reporter Wesley Lowery and Huffington Postâ€™s Ryan J. Reilly, both of whom have since been released.

After the Al Jazeera crew ran from the gas, police broken down their light setup and pointed their cameras at the ground.