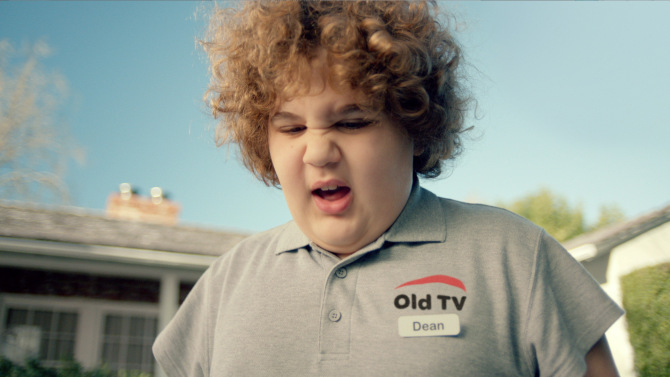 Of course, Dish itself is an â€œold TVâ€ provider, so the new campaign puts the No. 2 satcaster in the uncomfortable position of urging its customers to trade down to a cheaper, more consumer-friendly service.

Why is Dish shelling out ad bucks to undercut itself? The unavoidable issue here is that thereâ€™s no way for Sling TVâ€™s anti-incumbent marketing message to stand out without the company also risking losing some of its 13.8 million satellite subs.

The campaign, â€œDonâ€™t let your Old TV company push you around. Switch to Sling and take back TV,â€ promotes the over-the-top service that provides 20-plus channels starting at $20 per month as an alternative to traditional pay TV. Dishâ€™s strategy with Sling TV is to win over younger, cable-hating consumers who wouldnâ€™t have been in the market for satellite packages anyway.

But Dish is pretty much the same old-style TV service, encumbered with the same restrictive pricing and terms. Asked whether the campaign could cut into Dish subscription levels, Sling TV chief marketing officer Glenn Eisen acknowledged the potential for cannibalization but said it has been minimal to date. And, echoing previous comments by Dish execs, he said Sling TV is reaching not only cord-cutters and cord-nevers but also pay-TV customers buying the service as a supplement.

Dish dropped a net 134,000 satellite-TV customers in the first quarter of 2015, blaming the decline on competition and programming disputes with Turner Broadcasting, 21st Century Fox and certain local TV stations. The company has not disclosed how many Sling TV customers have signed up to date, but on a call with analysts CEO Charlie Ergen claimed the vast majority did not previously have any pay-TV service.

In addition to airing on TV, the Sling ads are posted on YouTube and the company will promote them via social and other digital channels. Eisen compared the spots to short â€œfilms,â€ designed in the hopes the campaign with go viral.

Eisen added that he anticipates some TV networks will refuse to the air the ads; note that Sling TV doesnâ€™t offer any broadcast TV programming, either nationally or locally. But so far, no networks have rejected the spots. The campaign is produced by San Francisco-based ad agency Camp + King.

Watch the 90-second spot in Slingâ€™s â€œTake Back TVâ€ campaign: