17.3 million viewers and households checked into AMC’s The Walking DeadÂ premiere of Season 5 this week, making it easily the most watched show on television. It is, for all intents and purposes, the highest rated show on TV right now.

Of course, that isn’t what is so necessarily interesting about the Nielsen numbers, because what really has people talking is how the show smashed the NFL’s Sunday Night Football ratings over the weekend…something that was certainly possible but that none expected with such a swing.

The Season 5Â debut pulled in 17.3 million total viewers on Sunday at 9 PM with 11 million among adults 18-49. With a rise of 7% and 6%, respectively, that viewership and demo series record chews up the previous high of 16.1 million watching and 10.4 million among the 18-49s that the Season 4 premiere of the blockbuster series drew on October 13 last year. (Watch the first four minutes of last nightâ€™s episode here.)

As it stands right now, the hour long S5 opener â€œNo Sanctuary,â€ directed by EP Greg Nicotero, seriouslyÂ scored a touchdown over theÂ NFLÂ among the key demo to win primetime in both broadcast and cable. That could change in the final numbers, as it did with last seasonâ€™s debut, which eventually saw a slim SNF win after what initially looked like a WD victory. However, the Philadelphia Eagles crushing 27-0 win over the NY Giants last night and the ensuing ratings fall from last week and last year makes it a hard one for the usually unbeatable NFL and SNF to turn around this time. Last season, The Walking Dead not only proved the most successful nonsports show on TV among the 18-49s but actually beat the NFL twice and the Winter Olympics three weeks in a row. 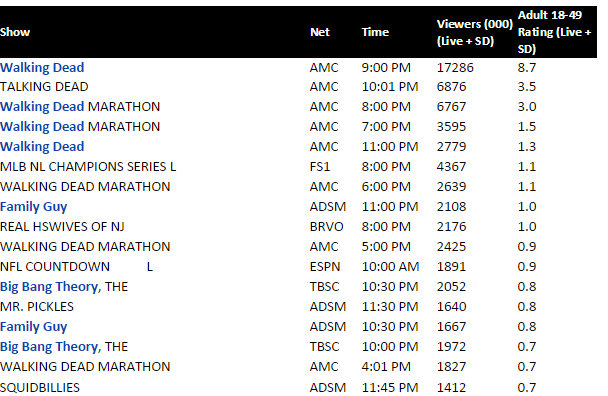