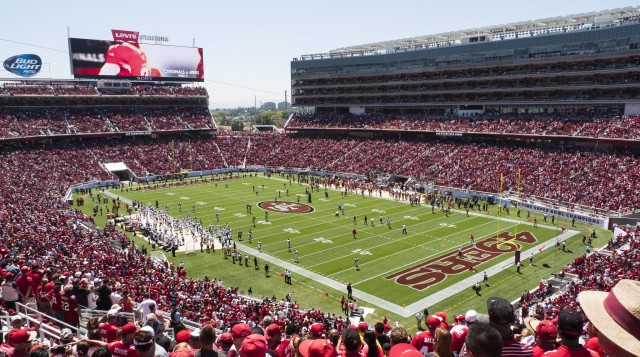 Widely promoted as the first of its kind by the San Francisco franchise, the team broke out its highly anticipated wireless service this weekend against the Broncos — rumored to support the entire 68,000+ stadium for any and all devices. While other stadiums have provided wireless internet to thousands of fans, none have claimed to be able to do all simultaneously, and many thought it might be impossible without some sort of paid service eventually.

Until now. ArsTechnica reports that the stadium “offloaded 2.13 terabytes during the event,” which 49ers VP of Technology Dan WilliamsÂ told Mobile Sports Report. The newly built Levi’s Stadium has 68,500 seats and more than a third of attendees used the Wi-Fi network simultaneously.

At kickoff, the system was serving up 2.3Gbps. During the second busiest moment, less than an hour later, the Wi-Fi network was distributing 1.7Gbps throughout the stadium. “We averaged more than 1Gbps for more than two hours,” Williams said.

That data includes only Wi-Fi, though cellular performance was reported to be strong as well due to small antennas distributed throughout the building.

A food-ordering app attractedÂ the most users, followed by ticketing and then video. Video will become a bigger dealÂ during the regular season whenÂ instant replays becomeÂ available on aÂ mobile app.

The Wi-Fi network had some problems on the crowded 2.4GHz band, performing better on 5GHz. “As you know, 2.4GHz is limited with non-overlapping channels, so we suspect a number of legacy devices may have some problems,” Williams told Mobile Sports Report. “We know we still have some optimizations to do in the upper bowl and upper concourse while we continue to fine-tune the main bowl and concourse as we noticed our cell edge was weaker than expected when the stands were full.”

DespiteÂ game video being blockedÂ from mobile devices atÂ this year’s Super Bowl in New Jersey, the Wi-Fi network served 3.2TB of data, with a peak of 13,500 concurrent users out of 82,529 fans,according to Extreme Networks. Facebook, Twitter, and Instagram accounted for much of the usage, with “more than 5 pictures per second” being uploaded to Instagram from Wi-Fi.