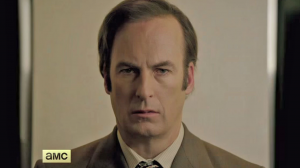 It’s been a month since Better Call Saul challenged the cable premiere records, and while the Breaking Bad spinoff may have piggy-backed some off of The Walking Dead‘s incredible numbers, it’s still amazing how far cable has come in just a few short years, ad AMC isn’t letting up in the competition they’re giving other premium providers.

Even with their massive success, AMC may have needed this second burst to take them where they want to go as HBO’s proverbial little brother. Better Call Saul just might do it.

The 6.9 million total viewers drawn in by Saul just missed the total audience mark for a new cable show, set by TNT’s The Closer in 2005 with 7.03 million. As for The Walking Dead, Sunday night’s second-half-of-the-fourth-season premiere drew 15.8 million viewers, 10.4 million in the key 18-49 demo. (The series remains one of the most powerful draws on television outside sports programming.)

But for AMC Networks, which is negotiating with pay-TV operators alongside much larger, vertically integrated conglomerates, two hits are certainly better than one.

It was only yesterday that The Walking Dead was seen as a one-time fad, just after Breaking Bad and Mad Men, but since then AMC has totally flipped the script on what can be seen as premium in-home over the cable lines. First HBO shows started to go mainstream, then Netflix jumped in and completely blew up the whole system, and AMC has been leading the way in terms of volume.

Netflix is still relying on only one headline hit, and as AMC is doing, they’ll need to diversify to continue to lead in that space.

Of course, with shows like House of Cards (Netflix) completely dominating, the lines between major studios and anything else has vanished, and what seems impossible just two years ago (Netflix becoming a regular hitmaker), seems likely. It’s an amazing shift and it happened nearly overnight–since Netflix took over.

With net neutrality, web-only TV (Sling) and cord cutting left and right, no one really knows exactly where cable is headed, but AMC and Netflix are showing us glimpses.