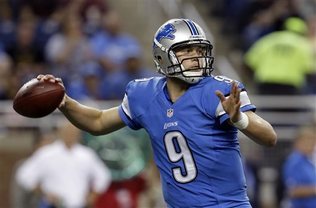 Detroit Lions quarterback Matthew Stafford stars in a pair of Dish Network ads posted on YouTube — though they’ve now been deleted, posing questions as to what exactly Stafford may have been doing. Is he going for a new PR move since his popularity has been dipping in the steel belt?

If you can find the clips you’ll notice a cute nurse swabbing his forehead — itâ€™s his girlfriend Kelly Hall. Stafford winks at her with a grin.

Stafford is lost in the woods, the fairies warn him of the pitfalls of other cable TV providers. Inexplicably, creepy marionettes join in the warning. Maybe Stafford is scared of puppets?

What do you think of Staffordâ€™s acting?