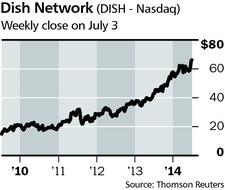 These are lonely days forÂ Dish Network,Â the nation’s third-largest pay-TV provider. A rapid wave of consolidation is transforming the media landscape, leaving Dish without a dance partner.

As those deals wind through the regulatory process, investors are left wondering what’s next for the satellite-TV player.

While Dish has 14 million TV subscribers, its value is now basically tied to spectrum, or wireless real estate, that it has acquired since 2008. The spectrum remains undeveloped, but it could ultimately be used for Dish’s own wireless network or, more likely, to bolster someone else’s. Bullish analysts think the spectrum alone could be worth $25 billion, after taxes, if sold. With a stock-market value of just $30 billion, investors are giving Dish short shrift for its satellite-TV business, which is highly profitable, even if slow-growing. As investors get a better handle on the spectrum’s worth, Dish shares could rise 20%. The stock has shown surprising resilience since the company was left out of the merger parade. It closed the week at $66.37, a 52-week high.

The next move could come in November, when the Federal Communications Commission holds its largest spectrum auction since 2008. “Just from a stock perspective, you don’t have to have a view on what Dish is ultimately going to do with the spectrum,” says Jason Bazinet, who covers the media, cable, and satellite sector for Citigroup. “The thesis is that the auction itself will be a positive catalyst for the stock. You just have to look forward to November.” Bazinet recently upgraded Dish to Buy with a price target of $79.