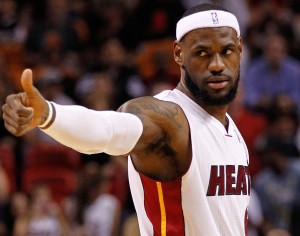 Bucking the standard of signing lucrative, long-term contracts, NBA players are now agreeing to shorter deals in the hopes of cashing in on the leagueâ€™s expected influx of television revenue in 2016.

Itâ€™s a recent trend that started at the very top of the league. Four-time league MVP LeBron James agreed to a two-year, $42 million contract in his return with the Cleveland Cavaliers earlier this week, and reportedly intends to sign a new, long-term deal with the team in 2016. James could have signed a four-year deal in excess of $80 million, but clearly was looking further down the road.

The number of years and termination date of Jamesâ€™s contract aren’t coincidences. The NBAâ€™s national television-rights deal with Disneyâ€™s ESPN/ABC and Turner Broadcastingâ€™s TNT also expires in 2016, but the league is in negotiations with the companies over a new deal. TheÂ Wall Street Journal reported MondayÂ that the league is seeking to double its TV revenue, which could amount to roughly $15 billion for the NBA, assuming the length of the new deals remains eight years.

How much the NBA attains for its TV rights directly affects player salaries. Under the leagueâ€™s collective bargaining agreement with the union, the players receive 50 percent of all league revenue. A TV-rights deal in the neighborhood of $15 billion would in turn greatly increase the leagueâ€™s overall salary cap, the amount each team is allowed to spend on its players.

James’s now-former Miami Heat teammate Dwyane Wade, as well as the recently signed Heat forward Luol Deng, have also agreed to two-year contracts. And the movement has trickled down to valuable role players like Los Angeles Clippers guard Jordan Farmar, and budding stars like recently signed Charlotte Hornets guard Lance Stephenson, who turned down an extra $17 million from the Indiana Pacers for a three-year, $27 million dealÂ with the Hornets.

â€œEach situation is different, but with the new deal coming, in most cases a short-term deal sets them up better or the new cap limits,â€Â  Ron Schultz, a former international basketball agent, told International Business Times in an email.

â€œIt depends on the player and team situation for what is the best choice,” Schultz said. “You really have to look at the goals and situation for both player and team to know if they are better getting locked in long term or positioning for more money, [a] better situation or contract security (not having to face multiple negotiations). The playerâ€™s value to the organization will also factor into their flexibility and willingness to negotiate short-term or long-term.â€

Essentially, any player who signs a two-year deal this summer, or a one-year deal in 2015, is giving themselves a shot at hitting theÂ openÂ marketÂ at an opportune and cap-rich time.

â€œI think these are very shrewd decisions,â€ Andy Billings, director of the University of Alabama’s program in sports communication and a professor in the department of telecommunication and film, said.

Â â€œUnder no circumstance would the cap drop, with the cap very likely to move substantially higher — perhaps another $20 million beyond the current $63 million,” Billings said. “There is always risk of injury or general physical decline, but thereâ€™s little doubt that average salaries will be higher after this new TV deal.â€

Speaking to the media inÂ LasÂ VegasÂ Tuesday after an owners meeting, NBA Commissioner Adam Silver said, â€œI think itâ€™s appropriate in that our players are our partners.