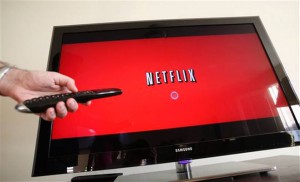 DISH today became the first major pay-TV provider in the U.S. to integrate the Netflix app into its set-top box, a major milestone for the ever expanding satellite/tech giant.

More on this from Slash Film, who call it a huge move.

Available on DISH’s second-generation Hopper, the app gives customers the ability to instantly stream Netflix movies and TV shows, including “House of Cards” and “Orange is the New Black,” from the same platform used to access their linear television channels. The Netflix app will rollout to DISH customers throughout the day.

“Pairing Netflix with Hopper represents the consolidation of two incredible video experiences,” said Vivek Khemka, DISH senior vice president of product management. “This app integration eliminates the need to switch television inputs to access content on varying devices. It gives our customers easy access to their favorite shows and movies, on both DISH and Netflix, without ever having to leave their Hopper.”

“As the first major pay-TV provider in the U.S. to add the Netflix app to its set-top box, DISH strengthens an already robust video entertainment experience for its customers,” said Bill Holmes, global head of business development at Netflix. “Many households subscribe to both Netflix and a traditional pay-TV service. Our vast library of TV shows and movies, combined with DISH’s lineup of live television content, gives customers easy access to a wide variety of complementary programming.”

Hopper customers will find the same Netflix user interface found on most other platforms. The app is easily accessibleÂ from any channel by clicking the blue button on the DISH remote and selecting the Netflix icon, or from the Netflix icon onÂ the Hopper main menu. Those new to Netflix can create an account in the app or by visiting www.netflix.com/dish.

The Netflix app is currently available on all broadband-connected second-generation Hopper set-top boxes. In the coming months, DISH expects the app to rollout to Joey, Super Joey and Wireless Joey clients. Additionally, in the future, titles available on Netflix could be integrated into the search functionality across live, recorded and Video On Demand programs for both the Hopper as well as DISH’s forthcoming OTT service.